In yet another tough game, the Rams lost 10-31 to the 49ers on Monday night. Heading into a bye week, the Rams need to get back into rhythm before they play the Packers in week 12. Now let’s break down the good, the bad, and the meh of yet another loss in prime time.

Ramsey seems to end up in the good section of this series every week and for good reason. Although he wasn’t matched up on Kittle or Deebo 1 on 1 the whole game, he did impact it. In the 2nd half, he had a near pick on Garropolo and came up just short of making the play. He did still play in the star position, and I’d attribute that to lack of CB depth. Ramsey leads the defense in targets and has the 2nd best passer rating allowed (55.2).

Kupp was a bright spot on the offense that couldn’t seem to get it going against the Niners. He did have multiple drops, but Stafford’s QB play didn’t exactly help him out. With the addition of Odell Beckham Jr., I’d expect him to fill in for Robert Woods while Kupp’s role remains the same. The receivers and Stafford all need to have a breakfast session as Kupp and he did earlier in the year.

Team chemistry is a huge part of winning games, more than the average fan might think. You saw the same thing with Tampa Bay last year where they were inconsistent and didn’t look cohesive at times. The same thing has been happening in LA with Stafford; he has to learn a new offense and earn the trust of the skill position players. A consistent theme in the Rams’ losses has been going down early due to turnovers and having a spark to try and come back when it’s too late. This team seems to be beaten up mentally after the loss at Tennessee and their play seemed to reflect that. Stafford needs to work with his receivers on timing and ball placement, something that comes with more practice.

Everyone expected this defense to take a step back, but Raheem Morris’ bend, not break mentality hasn’t exactly impressed me. As shown by Jimmy G’s pass chart, in the passing game they attacked the Rams linebackers and found great success. The Niners knew exactly how to exploit the Rams’ defense, run it down their throats, and ask Jimmy G to do very little. There were tons of missed tackles and a lack of communication between everyone on the team. The cornerbacks not named Jalen Ramsey were disappointing, and it showed LA’s lack of depth at the position. Troy Reeder and Ernest Jones struggled in coverage, and their tackling needs to improve. Morris didn’t exactly help the defense and had Leonard Floyd and Reeder on Kittle and Deebo instead of Ramsey. LA’s got some tough games to finish the year against some good offenses starting with Green Bay out of the bye, so they have lots to go over next week. 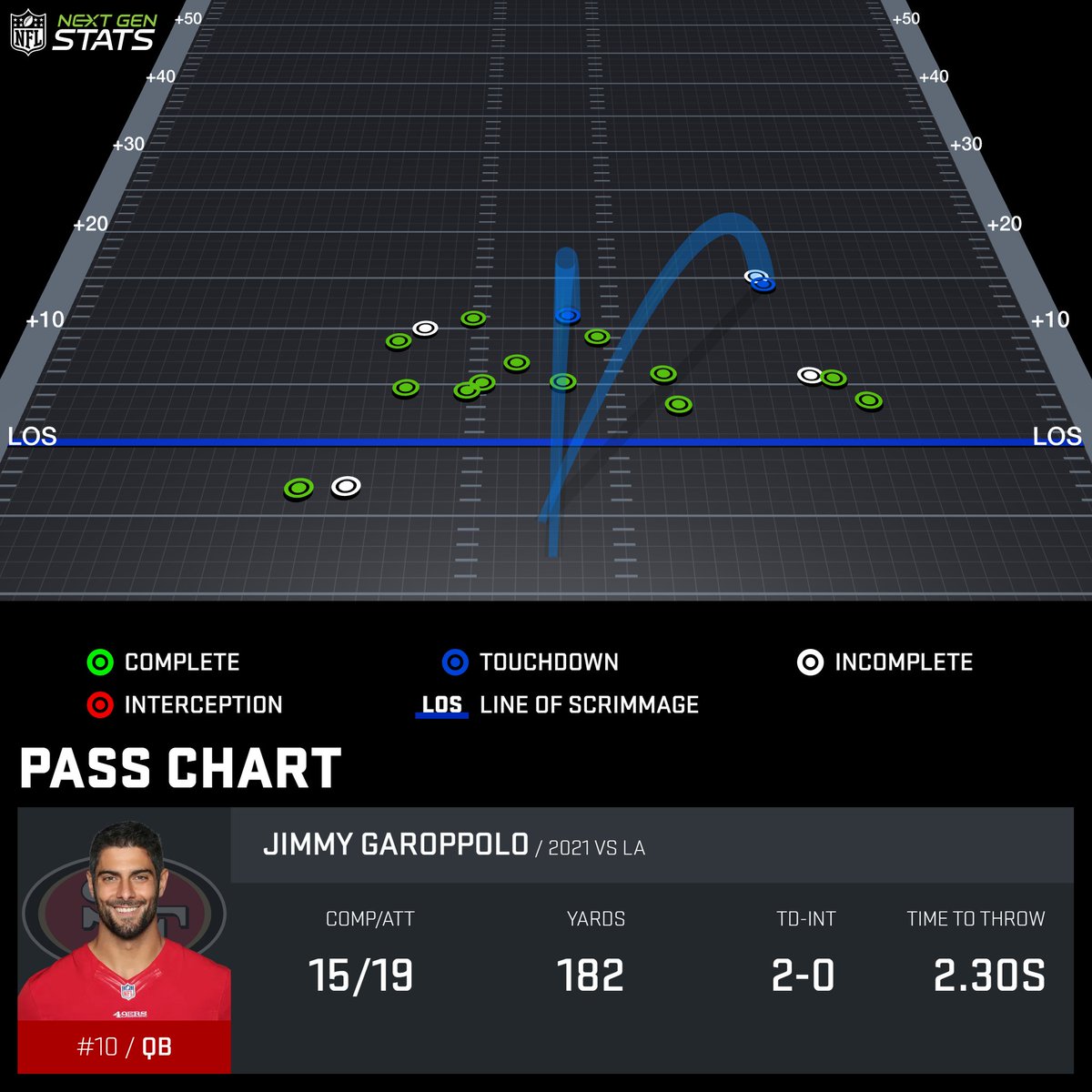 Matthew Stafford had his second bad game in a row, with a pick on the Rams’ two first offensive possessions. Granted, one came on a drop/fumble by Higbee, but the second was from a terrible deep shot to OBJ. QB1’s decision-making has been pretty poor over the past 2 weeks and he has now thrown a pick-six in back-to-back weeks. Instead of running for a couple of first downs, he chose to throw, one coming from in front of the line of scrimmage. Heading into the bye, Stafford needs to hit the film room along with building some more chemistry with Benny Skow and OBJ.

The Rams’ newest “all-in acquisitions” had their official debuts against the 49ers, but didn’t exactly show out. OBJ had 2 receptions for 18 yards and Von had 3 total tackles and 1 TFL. I’d expect to get Odell more involved in the offense as he learns it better after the bye week, but I’m not disappointed with what I saw from him so far. As for Von Miller, he seemed to make an impact while not 100% healthy. To me, at his ceiling, he seems like he’ll have the same impact as Dante Fowler, but his floor would be Samson Ebukam.

Overall, this team didn’t bounce back after the Titans’ loss, and they looked mentally exhausted out there. Both coaches deserve some blame for this loss, as there were some questionable decisions on both sides of the ball. Going into their bye week, there’s a lot to work on, starting with building some more rapport between Stafford and the pass catchers. If the Rams come out swinging as they did in the first couple of games, they have a good chance to beat Green Bay. If they continue performing as they have, there’s a very real possibility they finish 9-8.